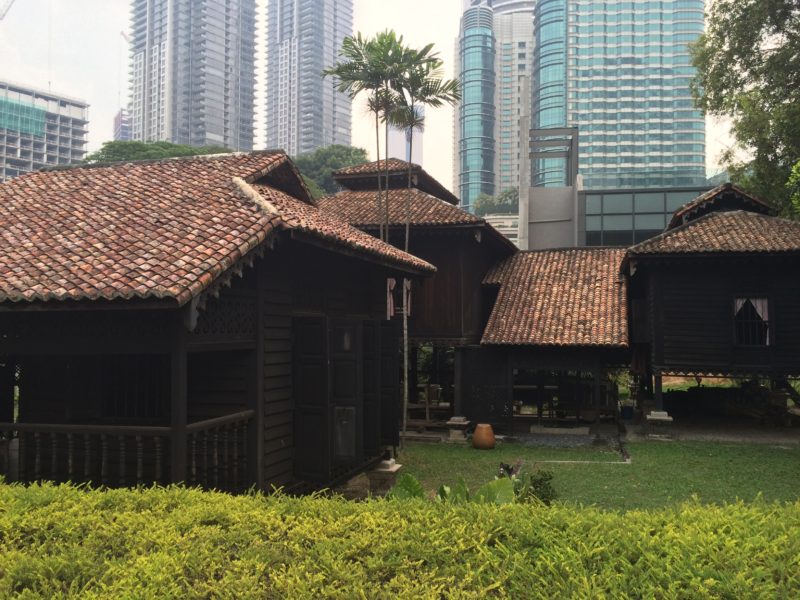 Vernacular buildings can be described as common structures of ordinary purpose built by or with the owners using local materials and commonly known techniques(1). One of the areas of Vernacular interest in Kuala Lumpur is the area of Kampung Baru. Kampung Baru is one metro stop from KL City Center and is also a short walk from the Medan Tuanku monorail stop at the Quill mall.

Before 1874, communities in Kuala Lumpur owned the land. Approvals for development were approved or permitted by the sultan or community leaders. The British, who were controlling many parts of Malaysia, introduced modern legislation, which was unfamiliar to the Malay people. Land system changes caused an influx of non-Malaysian groups and brought rapid urbanization. Correspondingly, native Malay groups started to leave the city. In 1899, 101.02 acres of land between the Klang River and Batu Road were set-aside for ethic Malays. The main purpose of creating this area, known as Kampong Baru was to protect the Malay Agricultural Settlement (MAS). In 1974, Kampung Baru was expanded by 154.04 acres (non-MAS area) after the Federal Territory of Kuala Lumpur was established (2).

Every family that moved in was given a plot of land of not more than one acre each and asked to build their homes. The M.A.S. area was set aside to accommodate Malay farming, however, with urbanization the area developed into a housing area. Currently there are 1,355 lots owned by 5,300 people (3) Many of the vernacular Malay houses were built in the 1900’s and are still standing today.

Kampong Baru (KB), Kampung Baru, or Kampong Bharu means “New Village” and is located in central Kuala Lumpur (KL). Kampung Baru is one of the oldest residential areas in KL. The neighborhood features traditional one and two story wooden homes placed against the impressive backdrop of downtown Kuala Lumpur.

Elements of the Vernacular Malay House

Traditional Malaysian homes are basically post-and-beam structures using a framework of upright and horizontal beams. Malaysia is quite hot and has regular heavy rainfalls so houses were built on pillars for ventilation and protection from the rains as well as protection from creatures such as snakes. Pillars are often wooden but concrete is also common. The windows in traditional dwellings may be short, tall or punched windows that may be nearer to the floor to provide ventilation for those seated on the floor for meals or games. Commonly, windows use shutters and louvers for ventilation along with other decorative features to aid ventilation. Finally, vernacular structures in Kampong Bharu will have distinctive gabled roofs suited for the climate (again, ventilation) and the aesthetics of the time. (5)

Vernacular houses in Kampung Baru, may seem ordinary and will even reflect some modern elements as inhabitants adopt new building materials and new ways of life. In the same fashion, vernacular buildings evolve over time to live within the patterns of the local environment. These vernacular houses provide a link to our cultural heritage and the lives of the people who lived in and helped form the communities. (5)

Kampang Baru is an area of great interest to the government and developers as the land represents one of the last commercially undeveloped plots of land in the heart of the city. Estimates place the value of the land at several billion dollars.

Malaysian authorities may legally take control of land for public or private development in the interest of ‘economic development of Malaysia.’ (5)

Further reading on the Vernacular Architecture of Asia

An Overview of the Traditional Malay House

Additionally, the staff welcomes you to visit the Library at Rumah Penghulu Abu Seman to further research Kuala Lumpur Vernacular Architecture. Call ahead to set an appointment.